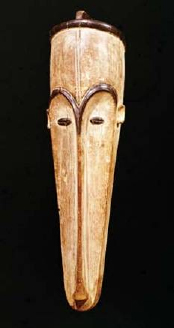 While the focus of this site is contemporary African art, I believe it is essential to understand what has gone before... for it is rooted in many things, not all of them within our capacity to fully comprehend.

...by experiencing the history, the journeys made by tribes across the continent of Africa and by closely regarding the creations of their artists, we can get closer not only to their mystique but also to the form of expression of contemporary African artists.

African Art embodies all that is mystical, spiritual, emotive and arresting about Africa. It can evoke joy or fear, emotionally exuberant or startled responses... it is fantastical, illuminating, complex... and in its purest form, beautiful beyond measure.

Pablo Picasso's words resonate for me when he stated...

"I have felt my strongest artistic emotions when suddenly confronted with the sublime beauty of sculptures executed by the anonymous artists of Africa".

However, if we look at the Western definition of 'art', it pertains to 'imitative or imaginative skill applied in design' and alludes to 'skillful execution as an object in itself.' All of these descriptions can be applied to the beautifully crafted objects and fine forms of the art of Africa.

It is the appearance that they cannot be separated from function that leads to the provocative current debate of whether art from Africa is indeed 'art' or 'craft'.

I, for one, cannot believe these pieces, created primarily for a functional reason, were not simultaneously being personally valued by the creator as a source of aesthetic pleasure and an expression of his/her imagination and inner creative being, so valued in Western art today.

Picasso recognized this inherent quality when he said...

"These works of a religious, passionate and rigorously logical art are the most powerful and most beautiful things the human imagination has ever produced."

Either way, the aesthetic significance of African art to the world of art today is immense. In my mind, there is no other continent whose study of their arts can shed such an instructive spiritual and intellectual light upon the societal structure of its communities who have inhabited, and presently do inhabit, this amazingly creative, richly rewarding land mass.

The art of Africa is a cultural heritage that leads us on both an historical and geographical journey.

The term usually refers to the work of 'black' or sub-Saharan Africa, the part of the continent that was originally occupied by Negro people who developed cultures quite separate from those of Mediterranean cultures, both Islamic and Caucasian. This area can itself be broken down again to West Africa, Central Africa, Eastern Africa and Southern Africa. Each specific area has its own art disciplines that are more prominently used than in other areas according to geographical environment, influences of climate, selection of and availability of raw materials and natural resources, cultural traditions and spiritual practices.

There are seven major types of art produced historically in Africa that are widely recognized...

The following decorative art forms can also be added...

Traditionally, the most important aspect of an African piece of art has been its function:

On the other hand, painting in Africa has been a form of applied art executed on rock walls to assist in story telling and recording events. Pigment and dyes have also been applied to decorate surfaces on sculpture, pottery, drums or architectural buildings, even bodies and skin.

However, collectors of art from Africa were very taken with form and until recent times, little was known of the community producing the art and the cultural significance and meaning behind the creation of such objects.

Most recently, as more depth in study has occurred, all forms of the art from Africa have been observed in an effort not to impose Western confines and to try and understand the intention behind creating the piece, for surely a traditional African artist had as sure a concept about what he was producing as any modern day one.

The motive for creating any piece of art is invariably complex, perhaps even more so in an African artist's mind for not only has he to satisfy the functional requirement of the piece, he also has to satisfy the aesthetic aspirations of his culture and his own motive for creating the piece... that may or may not, be in addition a personal form of expression, an emotional outpouring or simply an egotistical demonstration of his skill.

By regarding African artists as only being concerned with function, one ceases to identify with them as people with personalities, ambition, pride or egos. Coupled with this is the fact that seldom do we know of an artist's name. Only in recent years can we start to identify work from known sculptors such as the master wood carvers of Yoruba or the baboon master carver from Zululand in South Africa.

It is vitally important that artists such as those who produce the beautiful and imaginative pieces for Ardmore Ceramics in South Africa are recognised individually. This I am glad to report is happening more and more on the contemporary scene.

Some general unifying characteristics of African art may be identified...

Innovation of form ie the concern on the part of the African artist with innovation and creativity. There is a high level of inventive originality from area to area and in different timeframes.

Conventionalization ie combining a balanced composition and asymmetry, adhering to the aesthetic boundaries of beauty as defined in the 5 elements of African art.

Visual abstraction ie favouring visual abstraction over naturalistic representation and realism. It usually conveys ideas, the supernatural or spirits and thereby allows itself to be abstracted.

The primacy of sculpture ie with the emphasis on the human figure in a three-dimensional mode, even their fabrics are used as decorative cloths to turn the wearer into a living sculpture.

Importance of performance art ie the combination of music, dance, dress and bodily ornamentation, sculpture and masks imparts a general multiplicity of meaning and a multi-layered facet to a primary component of African art, thus making each individual object significant for itself and as part of a whole. The message becomes the art form and the meaning comes out in the context rather than the actual object.

Adornment and decoration of the human body ie scarification, tattoos, body piercing, body painting, wearing of masks and cloths and jewellery, all artistic expressions contributing to the transformation of the human form to another realism.

Nonlinear scaling and geometric shapes ie often a small part of an African design will look similar to a larger part, most prevalent in textiles, basketry and architectural patterning, also decoration of ceramics and drums. This creates a soothing effect, pleasant to the eye and creating an illusion of simplicity belying the complexity of design skill and technique required to create these patterns.

Multiple meanings ie the artists of Africa love to convey many meanings and messages in their work, not all which are immediately evident to the viewer.

Without a profound knowledge of the history and traditions of the art of Africa, its sociological makeup, its political and cultural contexts, its design principles and its common characteristics, we would fail to see where contemporary African art has arrived at, what it pays allegiance to and what it chooses to leave behind in its attempt to be part of a world universalization. 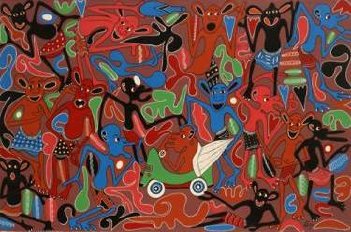 Perhaps the most valuable thing we can take away with us from this journey into understanding the art of Africa, is to take to heart and into our consciousness, that art can be interwoven into our lives in an intimate and meaningful way just as the African artists inherently achieved by creating beauty of form along with function. 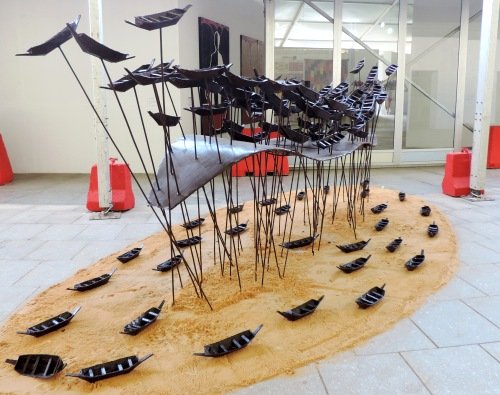 I believe that the present moment is ushering in a new golden age for African art.

We can view contemporary African artists from the perspectives of their origins but we really need to appreciate them for what they contribute to the collective consciousness of modern day Africa... here... now.