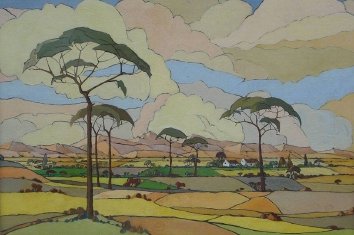 This period is hugely significant in the history of SA art as two things happened:

The other notable occurance was the formation of Art Centres and Workshops that became the grassroots of the South African aesthetic that still exists today.

Modernism is a term applied to the innovative development of the arts in the 20th C which saw a break with realism and naturalism and other such traditional art forms. Post-Impressionism, Cubism, Surrealism, Dadaism, Expressionism were all born in this era and the artists themselves saw themselves as shifting boundaries, the 'avant-garde'; confronting the widely accepted ideas that already existed.

Modernism can be seen to represent the breakdown of appearance in works of art of the form of the natural world into shapes, colours and materials that lead a life of their own. Exaggeration, distortion and abstraction are all tools used to push our connection to the extreme. 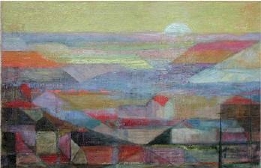 Maud Sumners, 'Mine Dumps at Sunrise'

The New Group was founded in SA in 1937 by an influential group of young artists who had returned from Europe where they were exposed to new modernist trends. The first exhibition in 1938 included artists such as Walter Batiss, Alexis Preller, Boonzaier and Lippy Lipshitz.

The last New Group exhibition was held in 1953 after 16 years of activity. A significant number of artists were women like Cecil Higgs and only one was black - Gerald Sekoto.

In the early years, (1929 onwards), artists like Maud Sumner, Enslin du Plessis and Alice Tennant painted in a Post Impressionistic style alongside Jacob Pierneef who developed a monumental, decorative stylization of form. Later, Maggie Laubser, Irma Stern, Wolf Kibel and Gregoire Boonzaier developed a form of expressionism by stressing emotion rather than the appearance of things and also most notably used South African material as their subject. 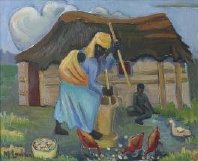 All of them challenged entrenched notions of what constituted art in South Africa by not only pushing aesthetic boundaries but also the notion of 'national art'.

The focus of art moved from the Cape to Johannesburg and Pretoria and it was here the avant garde of South Africa played out the dialogue between modernism and conservatism or modernism and 'national art'. Between 1931 and 1939 exhibitions were frequently held at the McFadyen Hall at the Transvaal University College and most artists who displayed their work there were seen to be reflective of contemporary art in SA. Public awareness of the notion of modernism began to grow thanks to the exposure of these artists.

However the political struggle between English and Afrikaans artists and buyers carried on for many years. English art was deemed to be conservative and hindered the evolution of a genuine authentic SA art style and identity. Afrikaans artists pursued the establishment of a national identity using nationalistic imagery like indigenous flowers, animals, San people, historical themes and landscapes. 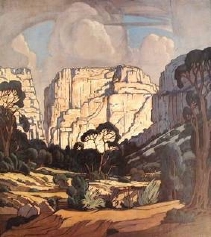 Jacob Pierneef has probably become the most notable artist of the early decades of the 20th C, his paintings having recently achieved record breaking prices at art auctions in the UK and USA. He held his first solo exhibition in 1913 and his modernist and geometric style revolutionized South African art. His iconic landscapes have a curious sensibility, a stillness, devoid of human habitation and imbued with dramatic highveld light and colour.

His manner of art is somewhat graphic, formalized and monumental in conception. This lent itself to murals and he was commissioned to execute nationalistic panels for the Johannesburg Railway Station and South Africa house in Trafalgar Square, London.

Irma Stern achieved national and international success in her lifetime and is without question one of South Africa's major artists. Stern was European by heritage and education with her early years spent at art school in Germany. Born in the Transvaal, she returned to Africa in her mid-twenties having already received recognition for her art by winning the Prix d'Honour at the Bordeaux International.

While living abroad she was introduced to Max Pechstein, the German Expressionist and he was undeniably a lasting and decisive influence on her work. Her first exhibition boldly challenged the conservative Cape community and her work was broadly condemned; even called 'humourous' at best, and 'ugly' and 'nasty' at worst. 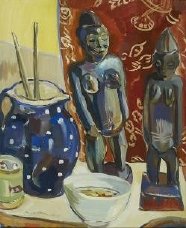 But within 5 years her work was published overseas in a monologue that had previously devoted two issues to Picasso and it was an acknowledgement that she was recognized as a significant, modernist painter. By the 1940's she was accepted in SA.

She travelled broadly in Africa to Congo, Senegal, Zanzibar, Central Africa and also Madeira, Spain and France. Within SA she visited Swaziland, Pondoland and the Eastern Cape, her subject matter becoming increasingly African in content; be it the flowers and still life's she painted in her studio in the Cape, or the landscapes and people she encountered on her travels. 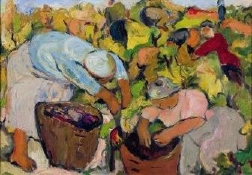 Her style is frequently described as flamboyant, exuberant, vibrant; one thing is for sure her paintings were not to be by-passed; arresting attention with her bold brushstrokes and her expressive use of colour. She was fervent and prolific in her art, working in various mediums (predominantly oils) as well as ceramics.

But she was also passionate about Africa which provided her with enduring inspiration and SA eventually recognized her worth and her contribution to Contemporary Art by presenting her with the Peggy Guggenheim and the Oppenheimer Awards in the 60's. Today her work can be seen in the Irma Stern Museum in Cape Town, the house in which she lived for many decades.

Gerard Sekoto is considered one of the father figures of black South African contemporary Art and helped by the publication of a book into his life by Barbara Lindop in 1985 and a retrospective at the Johannesburg Art Gallery in 1989 called 'Gerard Sekoto - Unsevered Ties', we are able to assess and affirm the substantial contribution he has made to the development of SA art.

Born and raised in Lutheran mission schools, he had a secure and happy childhood that proved to be a source of solace and strength in his years of exile and may also have contributed to his abiding deep sense of humanity. 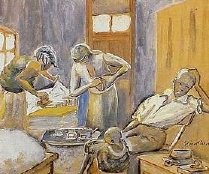 His time in South Africa is marked by 3 periods of residence whereby his environment contributed quite visibly to his work.

Firstly, he lived in Sophiatown in Johannesburg, immortalizing the township with his recordings of the vibrant life, then he lived on the edge of the poverty stricken District Six in Cape Town where his work was heightened by vivid, expressive colour using strident reds, yellows and muted greens that reflected the tensions that existed there. 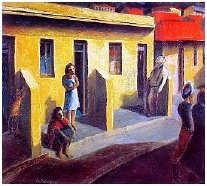 Finally he moved to Eastwood in Pretoria and the paintings he produced while living there such as The Pick, Sixpence a Door and Mine Boy represent the height of his artistic achievement in SA showing vigour and commitment as well as his inherent humaneness. Unusual perspectives and sensitive, perceptive portraits conveyed his sense of a socially involved realism. The work from this era is historically important as these townships were razed to the ground in the 50's and 60's.

His first solo exhibition was held in 1939 and a very successful one followed in 1942 at the Gainsborough gallery in Johannesburg. In 1940, his painting 'Yellow houses: A Street in Sophiatown' was the first picture of a black artist ever to be purchased by a South African Museum, the Johannesburg Art gallery. For the next 32 years it was the only  work.

In 1947, sensitive to the racism that pervaded his world, he left for Paris into self-imposed exile where he remained until his death. There, he lived a dual life between creating art and music, he was a jazz musician and in his 40 yrs in exile he composed over 21 songs. In the Art world, he gained recognition and achieved a breakthrough when he was the only black artist asked to take part in an exhibition at the Tate Gallery, London called 'Contemporary South African Paintings, Drawings and Sculptures' in 1948-9. 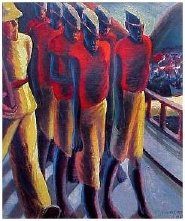 His subject matter was predominantly Parisian in content but in 1960 he was deeply affected by occurrences happening in his homeland. He memorialized the Sharpville massacre with clashes between police and protestors by painting vividly imagined scenes of terror. His forms generally became more stylized with flatter bodies and abstract compositions.

In 1966 he visited Senegal to attend a conference in Dakar organized by 'Presence Africaine', an organization for artists in Africa.

In the 1970's and 80's, disturbed by events in South Africa with heightened violence due to apartheid, he expressed his sorrow and anger very dramatically in emotive pieces such as this tonal blue piece. 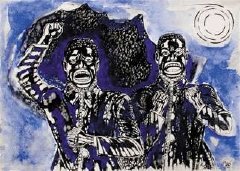