This contemporary African artist lives and works between Kinshasa and Paris but essentially sees himself as a ‘Kinshasa’ man... a significant element to this artist’s form of self-expression. 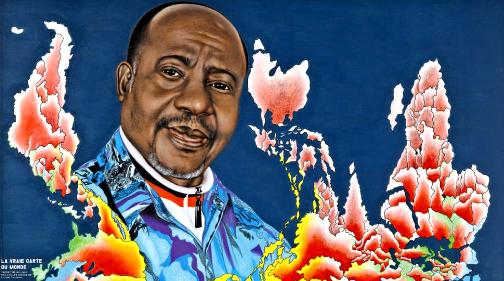 His work nearly always portrays him as the subject matter; the world is represented by him as he knows it, the modern man who has endured and survived with ego intact.

Samba Cherie started his creative career as a sign-writer, an illustrator and a comic-strip artist. This background in graphic design has carried through to his fine art; his style is exaggerated, mocking, humorous, (sometimes dark and satirical) and realistic in style.

Text in French and Lingala accompanies the visuals and is often key to critically understanding his work. This combination forces his viewers to engage. Especially so when Cherie has hung his paintings in public places where passer-bys are arrested and captivated by his vivid colors and dramatic content.

He easily confronts topics like nudity, eroticism, voyeurism and sexuality and with consummate ease he presents them alongside social commentaries on topics such as popular customs, social inequalities and political corruption. 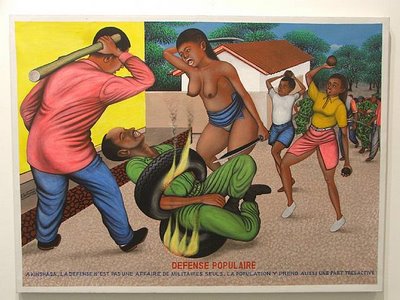 His subtle mockery and overtones of high morality in the accompanying text of his painted images allows him to get away with some quite scandalous and confrontational subject manner.

He manages to tone down his provocative, bordering-on-indecent or offensive topics by playing them down as urban truths, representing them with humour and a satirical air. 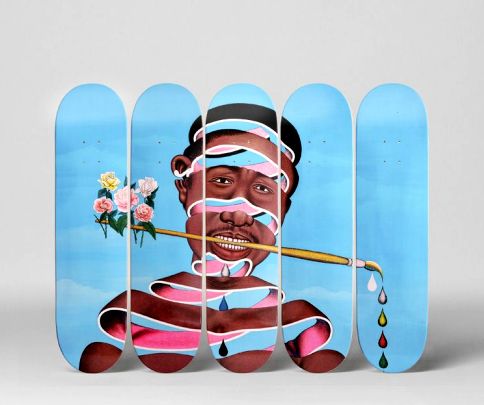 In 2003, using glitter and acrylic, Cherie painted 'J'aime la Couleur' for the Foundation Louis Vuitton Collection. In 2014 this symbolic painting sold for just over one hundred thousand dollars. It features himself with a brush in his mouth unrolling his own portrait as a spiral with an immense blue sky as a background. In the photo above the painting is reproduced on skateboards.

Being an initiator of painting popular culture, Samba is quite happy with the accessibility of this medium.