This acclaimed African artist first drew attention in 1989 for his work exhibited in the ‘Magiciens de la Terre’ Exhibition at the Pompidou Centre in Paris.

In 1992 Frederic Bruly Bouabre was featured at the Out of Africa show at the Saatchi Gallery in London and he has been featured in 2 Biennales in Venice, 20 years apart in 1993 and 2013.

His ‘Museum of (162) African Faces’ is part of the Tate Modern’s Permanent Collection and sits  among many other private and institutional collections on many continents. It shows the work of a truly visionary individual intent on preserving and recording the collective knowledge and history of his indigenous Bete people. 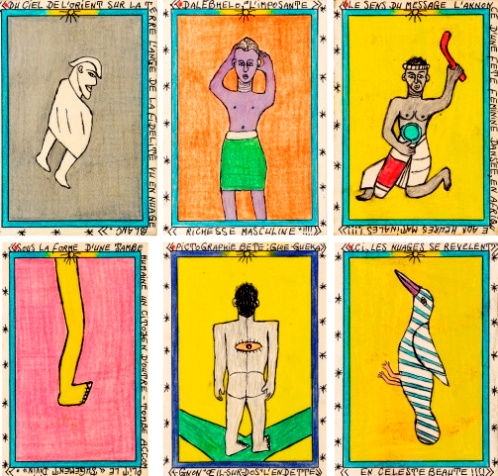 Bouabre invented a pictorial alphabet of nearly 450 pictograms, 'écriture africaine' as he called them, to represent phonetic syllables for his native language that had previously only been handed down orally. His goal was to safeguard his culture, ensuring it would be remembered and it would last.

After a revelatory experience in 1948, (after which he also became known as Cheik Nadro), he started amassing knowledge and then collecting and cataloging his research in manuscripts; people, places, images, messages, objects, sounds... he explored his immediate surroundings and the wider world with curiosity and wry humour, revealing himself to be an astonishing thinker, poet and creator.

In the 1970’s he started to transfer his thoughts to small drawings, postcard size using a ballpoint pen and colour crayons. 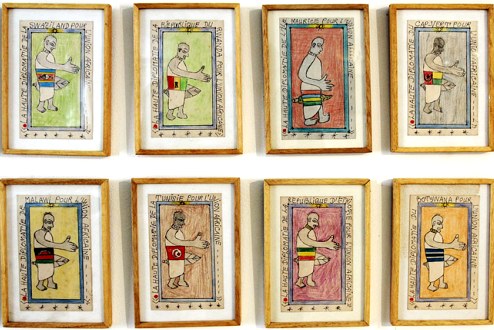 These drawings form an encyclopedia of universal knowledge and experience, featuring signs, divine thoughts, dreams, myths, sciences and tradition and they reveal his role as an artist with a ‘redemptive calling’.