Contemporary African artists are faced with an enormous challenge right now that has exactly to do with the fact that they are 'African'; existing in a global situation that currently appears to promote artists as worthy of recognition only if they comply with Western convention and parameters.

The task at hand is for their work to be seen as authentically contemporary; 'of the now' without the expectations and assumptions of the viewer diminishing the interpretation and therefore the intrinsic value of those artworks.

The work needs to be seen in the light of the particular context under which it was created.

Shows like 'Africa Remix' classified contemporary artwork on the basis of the artist's nationality and massed them under a very large 'African' umbrella.

That show served a purpose in gaining exposure for many contemporary African artists that may not otherwise have had their works exhibited at an international level but there is occasion now for a change in the way African art is exhibited.

It is time for a more in-depth approach to be taken to the history of African modernity; the development of which has led to the very vibrant and sophisticated art scene that exists in Africa today. 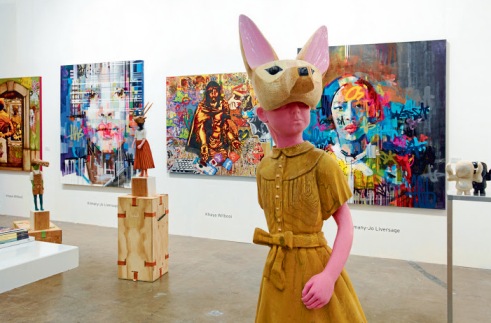 But they cannot do it alone and African governments must see that culture and development are inseparable; funds must be allocated for the advancement of art of all forms. Art and culture must be promoted within society until they collectively become a matter of national pride and art again takes its important place within the community as it did before colonialism arrived on the continent.

True contemporary African artists operate outside the rationale of international art and reflect their own underlying principles.

The following artists are well established and have made considerable impact on the art world, both in Africa and internationally:

One of the biggest dilemmas facing contemporary African artists today is racial prejudice which is a spillover from the same attitude that has existed throughout the last century.

The expectation is that African artists should be unaffected by global influences and to be seen as 'authentic' their art should remain tribally based, instinctive and primitive. This however shackles contemporary African artists to their bedposts but a few like Gerard Quenam have managed to express their tribalism in a very contemporary conceptual manner that pays homage to his past but makes it exciting and relevant to 'now'.

Now is the time to invest in effort to develop associations with some of the larger museums in Europe and the Americas who would benefit hugely from on-the-ground transference of ideas rather than just reinventing their archival artifacts and exhibiting them alongside their choice of international African artists, some who have had very little to do with the continent at all.

Assistance is definitely required but not in a paternalistic fashion and it is up to the African component to have enough self confidence about what they have to offer and showcase to ensure this does not occur.

There is much to be learnt about the culture of African societies and their traditional visual language; we have not even touched the surface in understanding its complexities and nuances.

Some of it that intricacy they may not even want to divulge for it has its own reverent place and being declared an art piece may be entirely inappropriate and demeaning to what it was created for. This is however a domain that requires a lot of money, intelligent initiatives, national discourse and continental collaboration so that African contemporary art can move beyond individual gain and collectively grow in substance.

Wangechi Mutu has to be one of the most exciting artists in the world art arena right now and is for me, the epitome of a thoroughly modern, global Contemporary African Artist.

The Deutsche Guggenheim has seen fit to elect her 'Artist of the Year, 2010', a decision that will guarantee long-term impetus to her career. 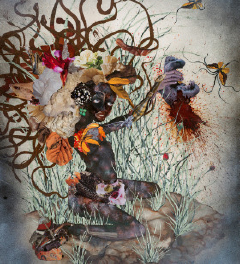 Wangechi Mutu was born in Kenya, schooled in Wales, and presently resides in New York. She is not so concerned with reflecting her original cultural identity as she is with how her life will evolve being a member of the 'Alienationals'; permanent travelers whose cultural identity has become a hybrid creation. 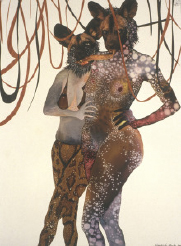 Her installation pieces suggest her own little piece of heaven, a room where she has ensconced herself just like many immigrants whose dreams and longings are echoed in the space they inhabit, creating some stability in their itinerant world.

Her evocative, hugely detailed collaged works are charged with her energy due to the very individual thoughts and time consuming processes that produce the final result. Her work is a reflection of firstly, her primary situation of existence and secondly, her heritage which one can locate in the use of animal masks, transcendence of beings, reference to traditional customs and primal habitats.

Julian Singozan is an extraordinarily optimistic person whose work could be shrouded in bitterness and brutality considering his chosen subject matter.

Instead it is uplifting and meaningful. And it is also beautiful; the use of color is specific and dynamic and his drawing is skillfully and intricately executed. The importance of his work lies in the insight of a contemporary African artist's approach to painting a narrative piece that has spiritual, historical and aesthetic components. 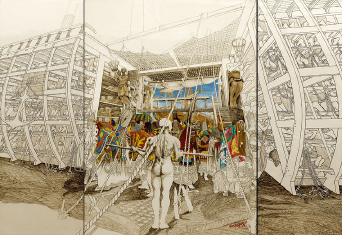 Julien studied architecture in Tashkent and then left for Paris where he took up drawing and painting. He represents pictorially historical events of his people in a well-defined technical tradition but infuses his work with a human and spiritual content that is reminiscent of his culture.