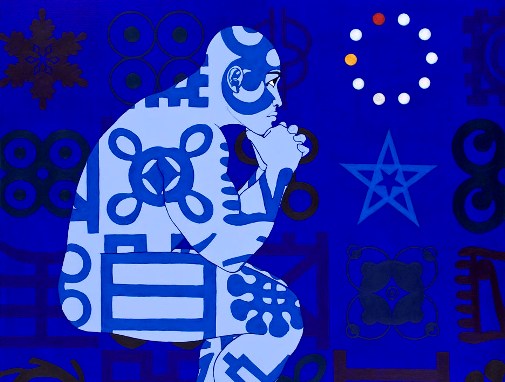 Creating a pattern is an applied art.

Patterns can have great impact.... be it subtle or dramatic, repeatedly used motifs are attention grabbing and they can create texture and set rhythm to any piece of artwork or craft.

In art and design

Artists use patterns to define their work, not only in a literal, visual way but also behaviorally; it becomes part of the process of their work and their actions, a method that incorporates structure into the artwork.

Patterns are most often used for their pictorial and decorative qualities but fine artists employ patterning in a more intellectual capacity. With them it is often used symbolically as well as being applied methodically to create good design, composition, interest and rhythm in an art piece. 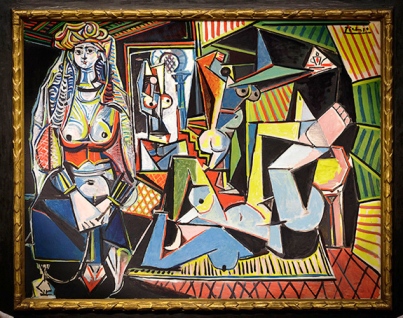 Pablo Picasso, the father of Modern Art used lines in vertical, horizontal, angled and cross hatched fashion to create frisson and energy in this extraordinary painting. The repetition of this one element allows some order to the disarray and the black shapes stand out as breathing spaces in the jumble of geometry. The influence of African masks and figures on his work is clearly seen here in both the style and placement of patterning on the female figure on the left.

Owasu Ankomah uses broken patterns for extra dramatic effect and to challenge perceptions and expectations of what is normal and how it 'should' be. 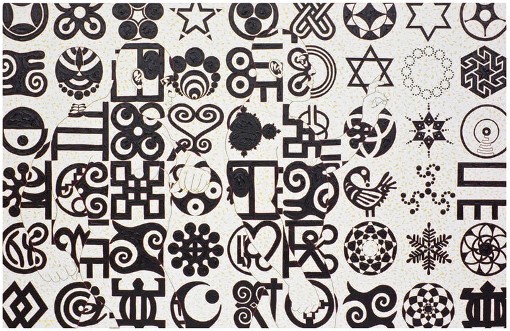 In his work he combines Adinkra symbols with other symbols from various world cultures to develop an inimitable style of his own. The Adinkra motifs are easily recognisable and we expect them to be repeated as they are on Adinkra cloths, normally running in squares, placed in repeat next to each other. While Owasu adheres to this structured layout, our eye realises that there are other shapes there that are defined by these symbols forcing us to look further, to reassess our suppositions. Monumentally large and perfect figures are found among the patterns.

The black and white canvases are the hardest to read, his blue series make a bolder statement and the figures take charge of the canvas. 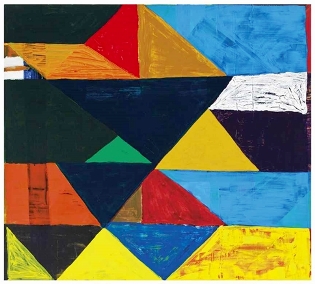 Atta Kwami began his artistic career as a weaver, studying with an Ewe master and then moving on to painting and fine art at university. Colour is the main feature of his art, be it in print or on canvas, his vibrant sense of the dynamics of colour defines his work.

Though his work is very contemporary in feel, it pays allegiance to his own roots of woven cloth and the music and culture introduced to him by his refined, artistic mother. 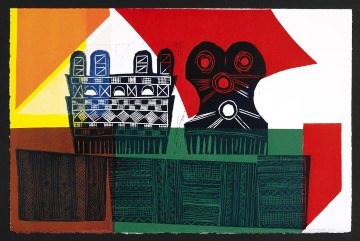 'Prints in Counterpoint', a series of 16 prints developed after Atta Kwami spent 3 days sketching African artifacts in a museum. 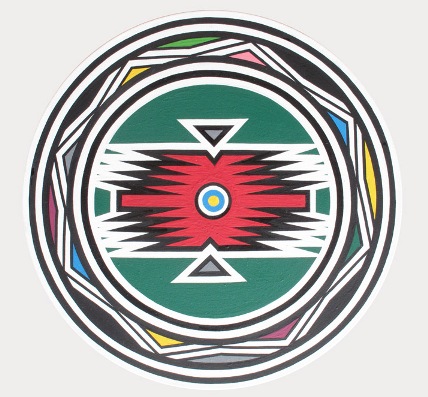 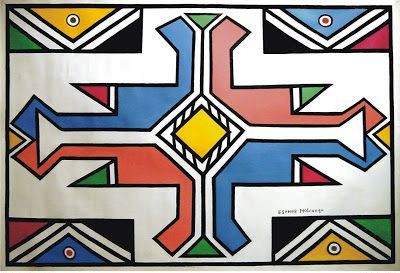 Esther herself, now in her eighties, sees the importance of re-writing Ndebele art into a modern idiom that will ensure the survival of Ndebele painting. This bold and creative artist has been involved with her art all her life and now she is taking it one step further... to graphics, to cars, to any surface which will portray her work to its best advantage!

She has not changed the essence of the style; strong colours, geometric shapes, abstract composition, it totally lends itself to modern design in any form. Sometimes her work is combined with the squiggly lines of wall finger painting. 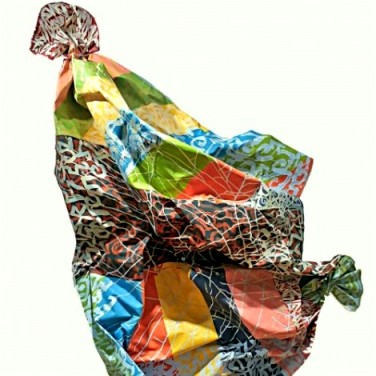 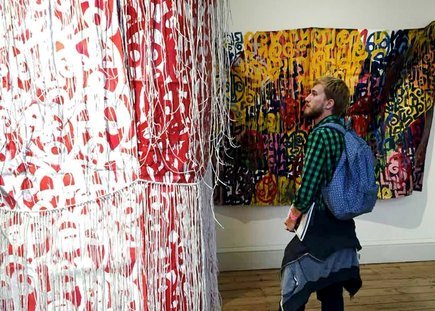 Victor Ehikhamenor makes 'cool' art, it has immense common appeal. Approachable in both personality and in his artwork, he continues to develop at all levels, both with his medium and his subject matter.

His characteristic paintings have unmistakable ties to his old Benin kingdom and are of abstracted, intersecting and overlapping figurative forms which embrace symbols and signs drawn from his childhood memories. His soft sculptures use fabric, paper and other recycled material as a base but everything is decorated with his landmark use of biomorphic shapes and forms, motifs and patterns.

"I don't see myself as an African artist, but a Yoruba artist because that is my identity". 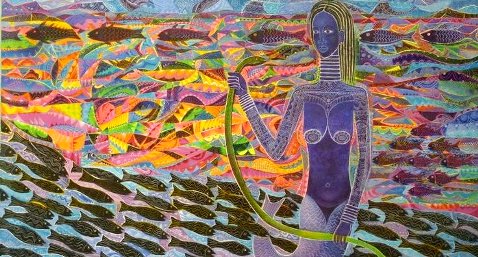 Contemporary Nigerian artist Moyo Ogundipe draws on both Western and Yoruban influences for his art. The house posts of sculptor Olowe Ise particularly inspire him.

In his work he has many recurring motifs from traditional decoration and the backgrounds to his paintings are seas of rich imagery, the intricate layers of patterns combined by colour and scale to sit against the main story-telling features and figures. His pictures are visual proverbs with great lyricism; one not only sees a Ogundipe painting but one 'hears' it as well.

Other artists who employ patterning in their art are: 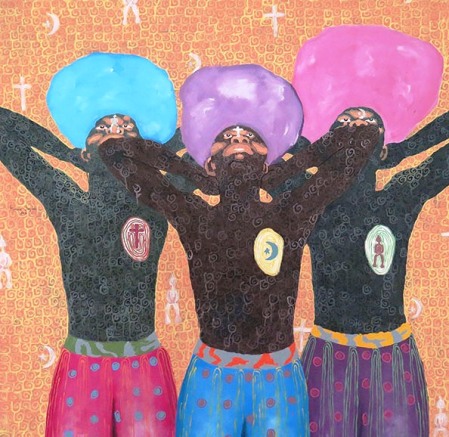 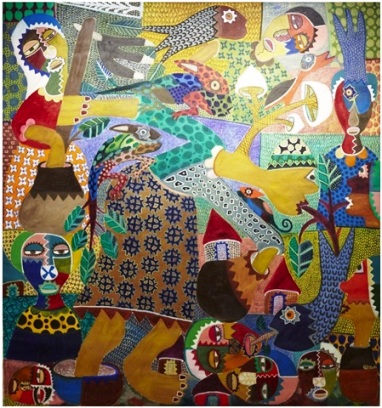 Changes to art that we call traditional should not be seen as some form of decline; art is dynamic, constantly redefining itself and evolving by introducing new language in the form of symbols and icons, new influences that are incorporated into daily culture.

Sokhari Douglas-Camp was born in Buguma province, Nigeria and although as an adult she now lives in London, Africa infuses all her thinking. Most especially aspects of her Kalabari culture and customs and specifically so, the colorful, imaginative costumes of masquerades, funerals and festivals. 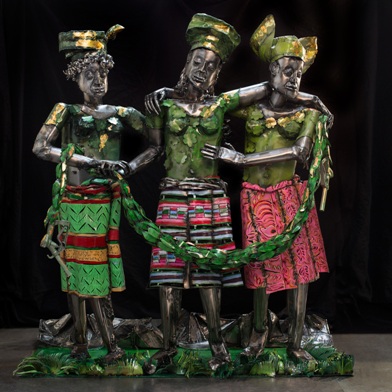 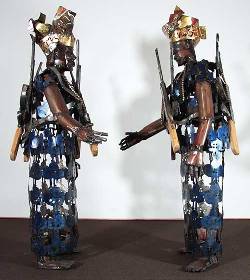 Accessories worn in the delta, metal, wood and gold leaf 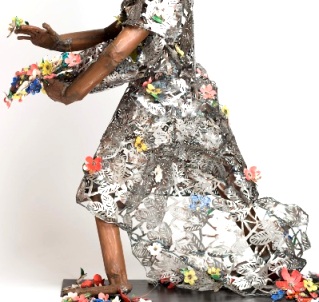 She manages to integrate time-honored traditions with contemporary technologies. Her preferred medium for her metal sculptures is steel and while this is a tough material, her sculptures somehow appear ethereal.

While she deals with strong, sometimes flammable issues, her figure sculptures manage to combine stature with a degree of playfulness to them that is endearing. They often involve cut-out shapes, a repeated motif in a woman's dress, sometimes even like lace - difficult to do with metal.

Pattern is a key feature of Sir David Adjaye's buildings and the National African American Museum of History and Culture has many design elements built into it. 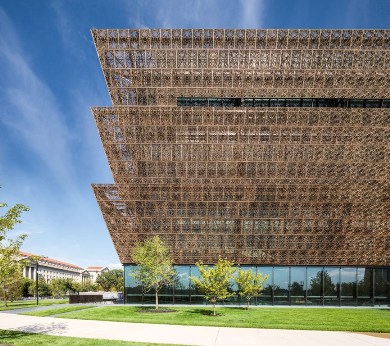 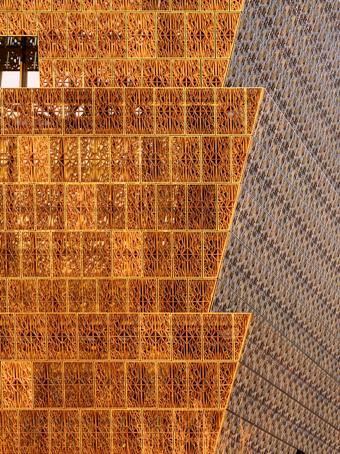 Firstly, the profile of the building takes its cut-off pyramid shape from an inverted corona that would traditionally be placed on top of a W African, Yoruban caryatid column.

The shape is then decorated with a very delicate pattern of mirrored and half-dropped metal panels the patterns of which are taken from the tradition of metalsmithing by freed slaves in the Southern States of the USA.

Adjere has eloquently managed to tie up both African and African American symbols and culture into one building which is historical in inspiration but contemporary in execution. 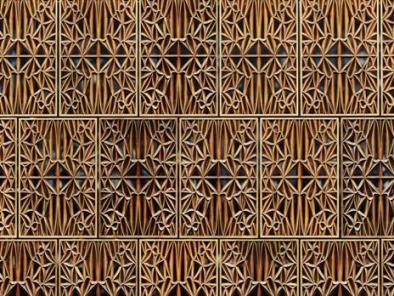 Diebedo Francis Kere  is the architect responsible for the bright, indigo-blue, canopied structure that appears to have floated in like some alien spaceship into the gardens of the Serpentine Gallery

At night, this community structure lights up and shows off the intrinsically African patterning that shines through the perforations - just as Kere intended it to do; an effect he worked hard to attain and has successfully achieved.

His whole concept behind the design of the Pavilion was for it to be just like the gathering tree in his home village of Gando in Burkina Faso. In a town with no power at night, the light from lanterns or torches or fires would draw in the people; a sense of occasion would prevail. 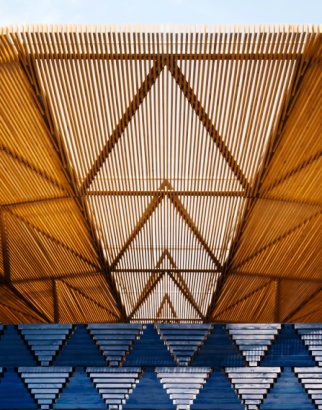 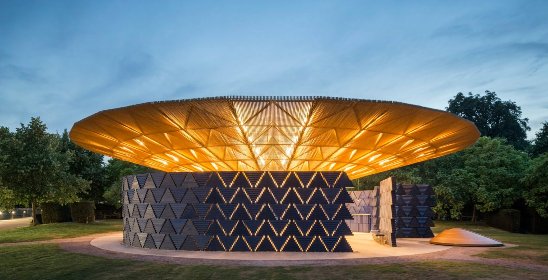 The perforations allow for movement of air and the circular form of the pavilion reminds one of a corral or boma but with open ends curling outwards allowing freedom of movement. The latticed, chevron-patterned canopy and the diamond motif walls are all made of timber.

Kere is always very sensitive to history and heritage and often incorporates details into his designs which have cultural significance. For example the rich blue colour has great significance; it is the ‘best’ colour, the one that you wear for the shiniest occasions, the meetings of your dream. 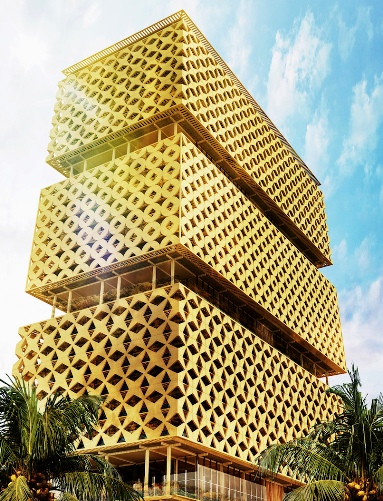 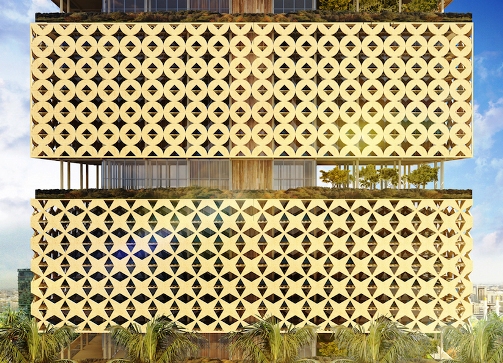 The newest kid on the block is this award-winning building constructed primarily of laminated veneer and known as the Lagos Wooden Tower.

Located in Lagos, Ghana it is designed and conceptualised by Hermann Kamte & Associates, an architectural firm from the Cameroon. 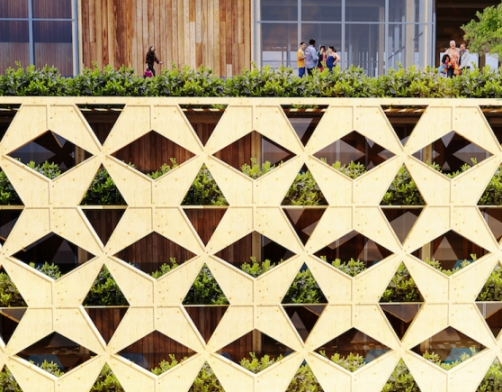 The core is wrapped in alternatively repeating graphic patterns that are design based in traditional Yoruban culture but appear here in a very modern and striking application.

Patrick Dujjaric, architect and anthropologist, was awarded the recipient of the Aga Khan Award in 1995 for this extraordinary building. The jury was exceedingly impressed with the way he synthesized traditional patterns in such a very modern way. 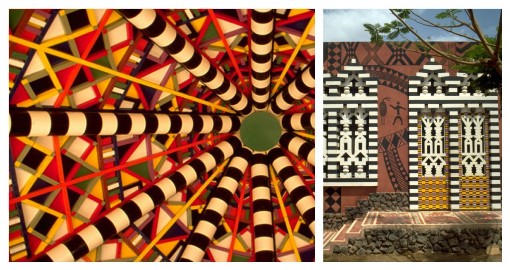 The project was started in 1984, the outcome of  a brief to build a community center for the people of Kaolack, a town situated some 160 kms SE of Dakar.

The architect chose to only fill a quater of the space with buildings. While the plan and massing of structures is simple, the ornamentation is not and there is an intricate use of iconography, ornamentation and decoration of all walls, columns, floors and ceilings. 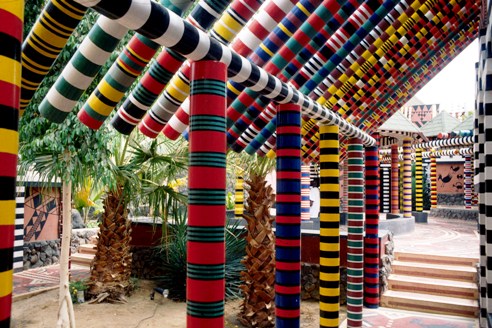 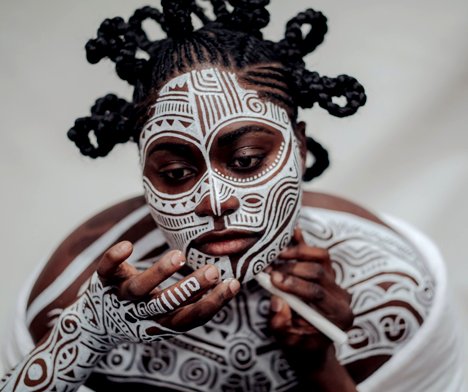 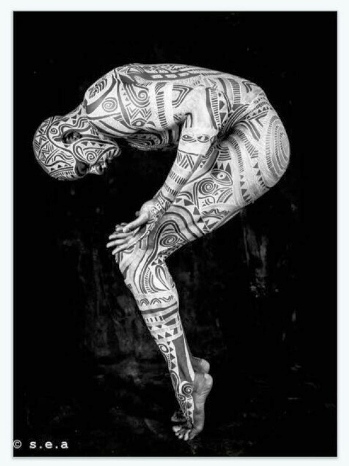 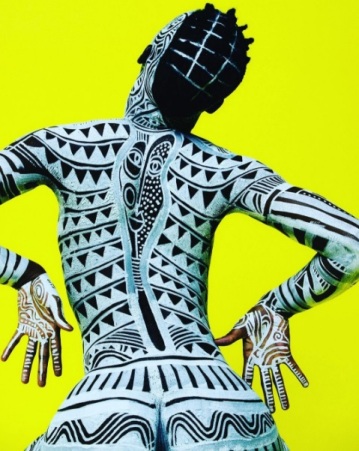 Laolu Senbanjo was born in Nigeria and raised with a Yoruba household's culture and mythology. He studied law according to his father's wishes but eventually persuaded them he needed to follow his dream:

See here for an in-depth interview _ Laolu Senbanjo: How an unlikely Nigerian artist landed his designs in Beyoncé’s album Lemonade 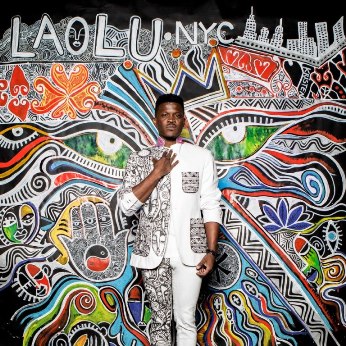