This contemporary African artist continues to live in his home country in a town called Malindi where he pursues his painting career. 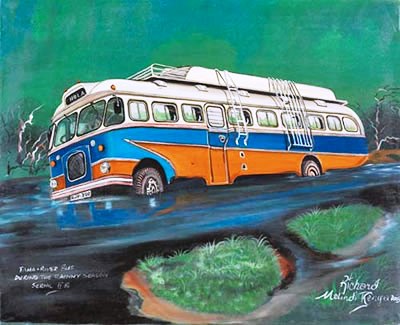 Richard Onyango has exhibited in many major exhibitions from 2003 onwards like ‘Africa Remix’ at the Hayward, Museum of the Art, Houston and the Venice Biennale of 2003. Several pieces of his work are a central part of the Pigozzi Collection (CAAC art) and more recently his work was shown in ‘Africa.. Telling a world’, Milan, 2017.

In Onyango’s early years he lived by the coast with his family where his father was part of a burgeoning industrial development. He formed a fascination for all the equipment surrounding him… bulldozers, tractors, trucks, planes… which to this day form backgrounds to his paintings. They are often associated with drama and disaster and, extraordinarily, painted from memory.

The viewer often becomes a helpless onlooker to the story being enacted out on canvas or board. 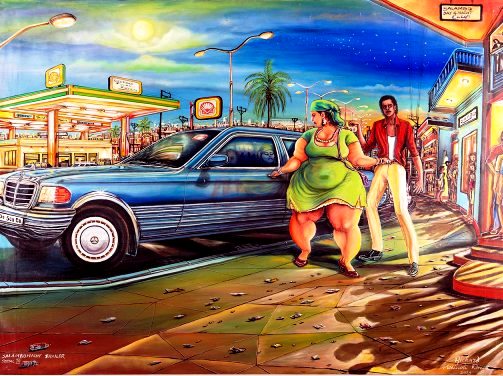 As a young man he made a living from many things… sign painter, musician, carpenter, woodcarver, fashion and furniture designer.

His painting style reflected this design career with strong graphic elements, intense contrasts, use of outlines and dramatic lighting and colour such as in this painting above.

The other extraordinary thing in his narratives is the representation of his affair with a large white woman called Drosie who he painted again and again in real or imagined circumstances.

Psychological tensions are very apparent in these pieces… the titles tell it all!