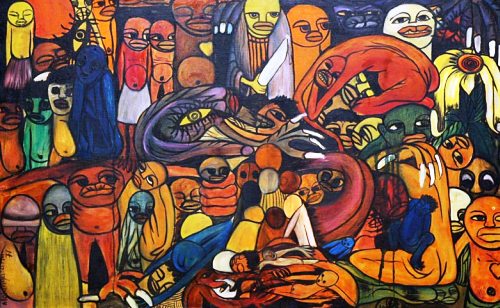 His bold vision of life depicts a communal co-existence between humans, animals and flora but it is not always a happy scenario. Early themes of folklore, mythology and legends, religion and family life reflect his disparate childhood; growing up in a rural environment with his mother, (the district teeth-sharpener)... and a mission school foundation. Fanged monsters, crucifixes,skulls and fowl would find their way into his compositions.

He moved to Maputo by the time he was 12 to try and find work. There, he found a position as a ball boy at the tennis club. One of the patrons named Augusto Cabral discovered his talent and began to support him with art materials and promoting his sales. He began to attend the Nucleo de Arte (Artists Association) and before long he was contributing work to group exhibitions which led eventually to him having his own show by the time he was 25.

Malangatana presented a visual commentary on life under the Portuguese colonial regime.Titled Juzio Final (the Final Judgement) he had dared to start as he would continue... with pieces that depicted the struggle and concerns of ordinary people caught up in a brutal war. 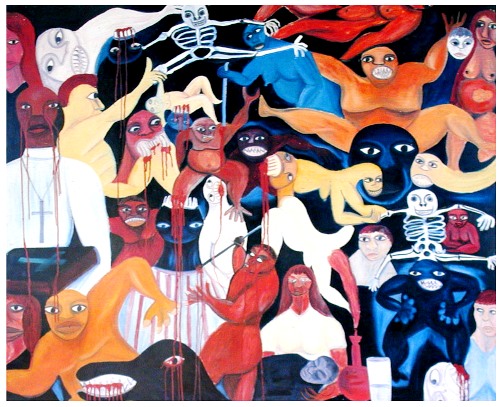 Critics were impressed with his strong compositions, his captivating imagery and his ability at storytelling. The subject matter was one thing, the other was his unique style; intense palettes of orange, red, yellow, blue and black and dense configurations showing a riot of figures and human form. 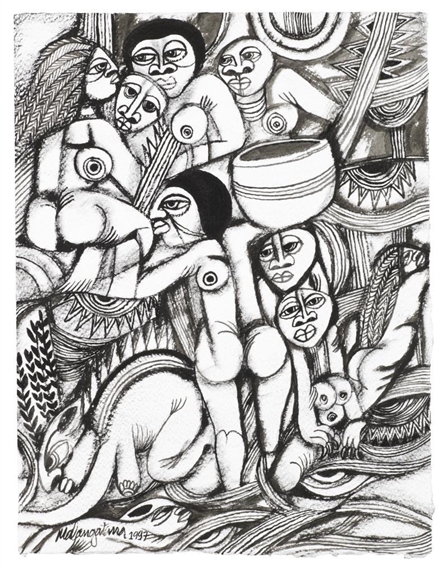 Malangatana, from '7 works on paper'

Malangatana was a master draughtsman: his drawings are hugely confident and often express his deepest passions and thoughts; torment can be realized in graphic images in a way that is less visually disturbing but still has huge impact...his message prevails. 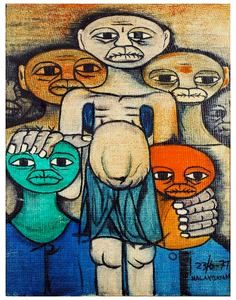 As Malangatana developed in maturity as an artist and a person, his own consciousness rose to the fore. He began to enter the political arena and declared himself a Marxist. In 1964 this fervor was responsible for his 18 month imprisonment for political affiliations that threatened the governing colonial Government. Upon release he left for Portugal where he studied printmaking and ceramics having been awarded a grant from the Gulbakian Foundation.

He was prolific during this period, continuing to depict the horrors of war and painted the tragic consequences of deprivation, hunger and despair.

In 1975 having returned to Mozambique to continue to work in Maputo doing large scale commissioned murals, he joyfully witnessed his ravaged country’s independence. This euphoria was shortlived as the Civil War erupted only 2 years later and his production declined. However this Blue period produced some of his most powerful pieces.

In 1992 after the Civil war had ended he introduced landscape images and began to work with softer palettes such as in his ‘Rose’ period. 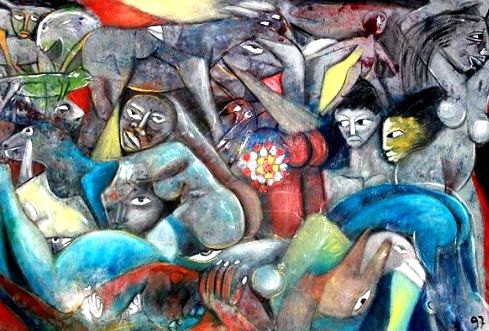 Malangatana  was the artistic embodiment of the continuing struggle of Mozambique. He was not only revered as an artist but also for his contributions to peace. Unesco awarded him an Award for Artist for Peace in 1997. He was a founder member of the Peace Movement of Mozambique and his poetry has been published in journals and the Anthology of Modern Poetry from Africa.

Touchingly he was held in high esteem by fellow artists and, most poignantly, by the young artists who he nurtured and inspired until his death.

I believe his worth is still to be realized internationally; the uniqueness and power of his pieces for both their drawing and their content needs to be fully recognised.