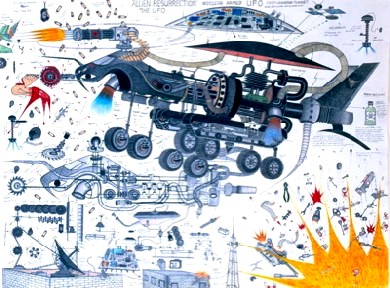 This unique artist from Sierra Leone is a fabulously individualistic designer and inventor.

Growing up in war-torn Sierra Leone Abu-Bakkar Mansaray took refuge in self-teaching himself maths, science, physics and electronics with the use of text books. Extending the creative aspects of his personality he began to build in wire and metal like many young males before him. Starting with toys and cars, he ended up with constructing intricate and complicated futuristic-looking machines and mechanisms.

In 1998,  Mansaray escaped the civil war in his home country to settle in the Netherlands and here he turned to drafting large-scale, monumental drawings that gave shape to imaginary contraptions that produced fire, light, cold, wind, water, movement and sound.

These drawings were executed in pencil, ball-point and coloured crayons that were used to bring flash pinpoints of drama to these extraordinary artworks. 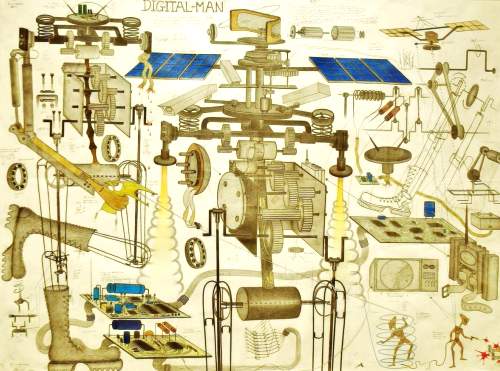 To stand in front of a Mansaray is to lose oneself in an imaginary world of flying machines, guns, war heads, intricate mechanisms, tiny human figures and large boots with thick tyre treads. Each monumental narrative piece seems to be the opening scene for a descent to hell. He seems not to be able to escape his past and we are drawn into it… like it or not!

Pieces are often accompanied by dense annotation, holding one’s attention for some time.

Most recently he has been part of an exhibition in Germany called “Afro-tech and the Future of Re-Invention” which seeks to present Africa as a continent of technological innovation. 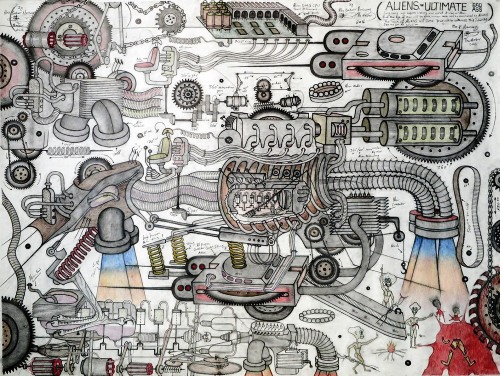 The fact that Mansaray’s drawings are pre-Afrofuturism  and can be included here in this exhibition show just how much his incredible originality and imaginative mind is to be admired and how ahead of his time he was.