Painter, (ink on textiles or canvas), calligrapher, illustrator, tapestry and performance artist. Educated in Khartoum and France where he obtained his doctorate in History of Arts in 1990 and a teaching diploma in Fine Arts in 1995. 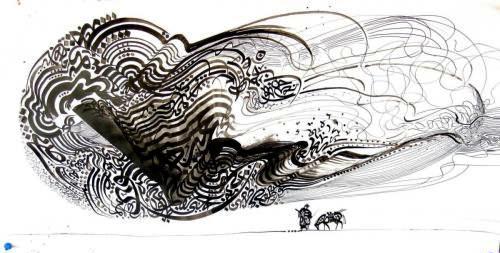 An accomplished visual poet and image maker, he uses calligraphy to convey messages even if the language is not understood by all, leaving it open to the mind to interpret what lies before one.

Foremost exhibitions this contemporary African artist has presented his art at include 'Seven Stories About Modern Art in Africa' at the Whitechapel Gallery in London, 1995 and 'Modernities and Memories' at the Biennale, Venice of 1997.

Thereafter, Hassan Musa's work has been featured at the Museum for African art, NY, 2012 and more recently at the Smithsonian, Washington, 2014. Those mentioned are just a few of the key showings he has taken part in while also holding numerous solo exhibitions in many major cities throughout the world.

Musa is known for endowing traditional painting techniques with new meanings. His commentary is often socio-political and reflects his knowledge of art history. 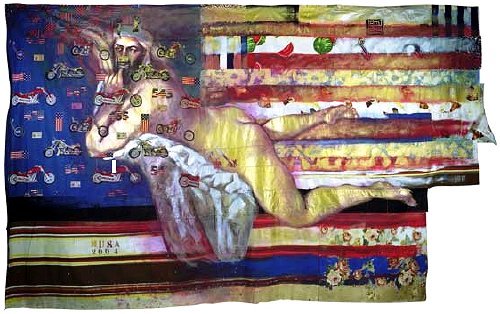 Osama Bin Laden appears in many of his works.... as a mythical figure, an icon which emerged in the absence of a body in the minds of the American people.

In 'Great American Nude' above (of which there are a number of versions of), Bin Laden is presented in a classical pose but with pop art overtures.

Hassan is a major voice in breaking ties with any broad classification of African art. He does not feel he needs to be linked to, or defined by, his heritage or where he comes from.

Rather, he uses Western images to get the viewer to think again about world issues and values, subverting recognizable paintings for his own messages. The painting below is based on Millet's 'The Gleaners' but the women in this painting are clearing minefields; bandages around their ankles and blood red fruit and vegetables raining down from the sky. 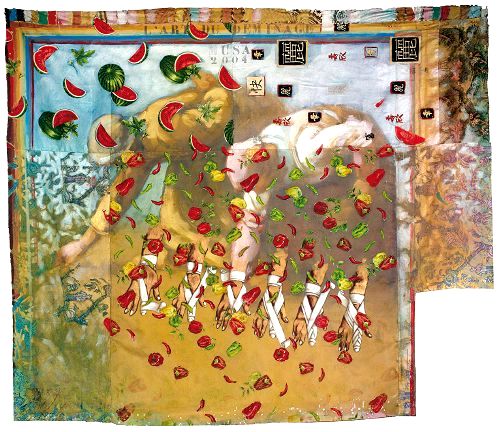 'The art of Mine Clearance'

When he holds his performances which he calls "Graphic Ceremonies", he invites the attending public to actively contribute and work on the usually large piece of pre-printed and prepared fabric lying on the floor.

For Musa, the process and the creative act is more important than the end result - it takes away reverence for the finished object and the audience has lost its objectivity and become more subjectively involved.