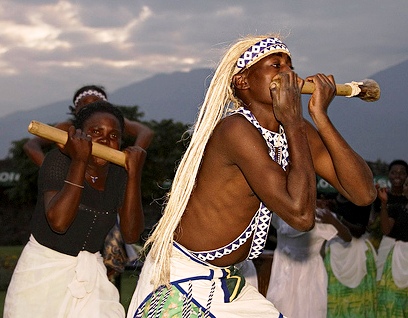 Performing music and making African musical instruments is an integral part of most communities and it varies not only from country to country but from village to village.

There are common features though and much like the other forms of African art, most traditional African music is more than just aesthetic expression.

African music is a total art form closely linked to dance, gesture and dramatization. It permeates African life and has a function, a role to play in society; songs are used for religious ceremonies and rituals, to teach and give guidance, to tell stories, to mark the stages of life and death and to provide political guidance or express discontent. 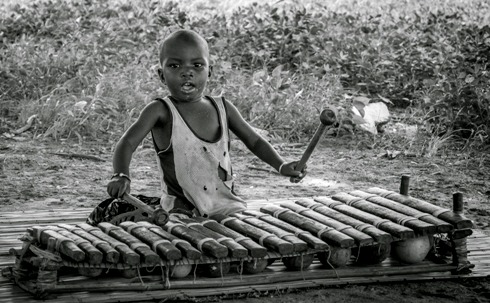 Child playing a Balafon in the Gambia

It also serves to entertain and is used in ceremonial festivals and masquerades to work up fervor from the spectators and participants alike. Singing, dancing and playing African musical instruments ensure a dynamic event transpires.

The impact of the music is tantamount; the beauty of it, like African sculpture, is secondary to the primary function. Performances may be long and often involve the participation of the audience and much of it is associated with a particular dance.

There are some African musical instruments that cross boundaries and are found in varying shapes in the different countries but still have the same basic form. Some instruments have changed very little in 800 years since they were first recorded. 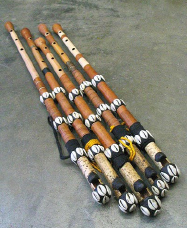 Africans have strong beliefs about the status associated with particular instruments and with the spirit of an instrument. The carver of the instrument is held in high regard in the community.

This is especially true with drums. 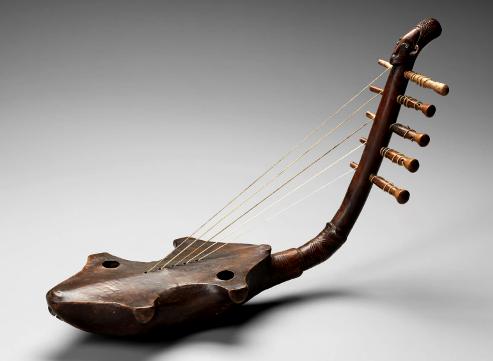 The following are some of the African musical instruments used throughout the continent, primarily sub-Saharan:

African musical instruments also serve as works of art, carved into surprising shapes, covered with patterns and decorated with beads, feathers, paint or cloth. Figures are sculpted into the instrument as spiritual tokens empowering the musician to filter the godly or ancestral messages.

Saharan 'green' cultures left a legacy of rock art describing some are the earliest scenes of African music such as in the painting below. It is probably one of the oldest existing testimonies to music and dance in Africa and is attributed to the 'Saharan' period of the Neolithic hunters. 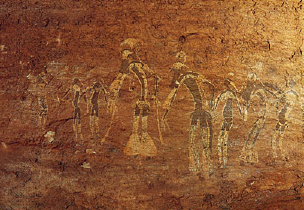 Traditionally, African musicians were not concerned with the impact of the music, nor its 'beauty', it had a specific function with dance being an integral partner to music and was used to entertain as well as to mark occasions and provide moral guidance.

African singers use a large number of sounds, not all of them appealing to the ear; some are confronting or emotionally and spiritually charged. Singing style can be loud and resonant but can also be constricted and accompanying sounds can be added.

African traditions also emphasize dance and all the mime and props that go with it because movement is a significant form of communication.

Body percussion; clapping and foot stamping is also utilized. Improvisation is a fundamental element in African music. The musician's capabilities are measured by the community and his listeners, they must reflect his inventiveness... his creativity... his inspiration... and his technical prowess.

From the 15th C onwards, our history of music making in Africa is mainly derived from studying representations of dances and making music with African musical instruments and scenes depicted in terracotta, stone or metal.

In Ife, Yorubaland we see footed cylindrical drums dating from the 10th to 14th century on terracotta artefacts.

In Benin, pressure drums appear on brass plaques from the 15th C onwards. These plaques have proven to be a never-ending supply of information on the use of instruments like horns, bells, drums and bow lutes in ceremonial occasions. In real form, the iron bells excavated in Katanga province, Congo and the Zambezi Valley of Zimbabwe are some of the earliest actual African musical instruments found, also dating around mid/late 15th C.

Migrations of tribes, movement of slaves and colonial porters and servants have all contributed to the wide dispersement of African musical instruments.

For example, lamellaphones with metal keys were a prominent feature in ancient Zimbabwe and spread through neighbouring kingdoms to Katanga and Angolan cultures, all the while becoming smaller and smaller for travelling purposes. Zimbabwean 'mbiras' (lamellaphone) and 'ngomas' (drums) were first written about by Father Joao dos Santos, a Portuguese who travelled through the lower Zambezi in 1586 and recorded his impressions of the sounds these instruments made and the effects they had on their combined audience.

Historically, Africa has contributed hugely to music-making in many other areas of the world most notably the Americas and most significantly in genres such as jazz, rock and roll, blues, salsa and samba. Music once considered "primitive" by Westerners is now highly respected for its rhythmic sophistication and complexity.

Singing is as basic a function as talking for most African people; mothers sing to their babies on their backs as they walk, work and dance, building an inherent sense of rhythm.

There are a great variety of sounds produced but generally singing is loud and resonant but it can also be shrill and piercing or it can include ululating, clicks and grunts. It can also be extremely melodious, using acapella and creating deeply harmonious songs. 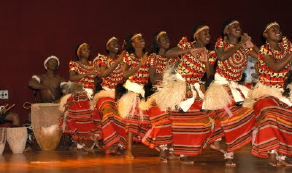 Personally, some years ago, I had the privilege to listen to an extraordinary group of performers from the Zambesi Valley in Zimbabwe: Tongas, whose haunting music blown from their horns and beaten off their drums made such amazing sounds that, if one closed one's eyes, one could believe one was in New York or London hearing the very latest contemporary jazz. 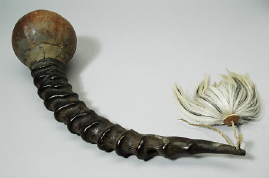 If anyone has heard the ground hornbill calling to his mates in the African bush in the early mornings then you will know the sound of Africa and it is echoed in their fantastic evocative notes.

If anyone has watched an African woman hoeing in the field with a baby strapped tight to her back and the thud of her hoe is harmonised with the song she is singing while she toils, then this too is the resonance of Africa and is intrinsically lodged in their genetic memory.

Contemporary African music is immense in every respect and is possibly the most dynamic and vibrant form of cultural expression on the continent.

The music industry is huge with most countries supporting wonderful musicians who still use traditional African musical instruments but overlay them with contemporary rhythms and lyrics. This is a hugely exciting form of expression for modern day Africans and what they produce is loved and admired and danced to, the world over.

African musicians represent the collective memory of their continent and their instruments reflect their history, their culture and their ancestry. 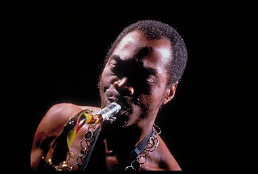 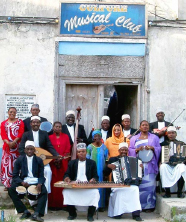 While being hugely creative, what is consistent throughout this huge continent is that it has become, like art, a vehicle with which all participants can make a social, political and sometimes spiritual comment. New forms are constantly being created in response to new social, economic and political contexts. Many African states have experienced very hard times in recent history and in the face of this, music has demonstrated itself to be a successful manifestation of emotion in the face of heartbreak and suffering.

With poetry, dance and prayer the experience becomes a dual expression of inner freedom and possession, radiant happiness and anguish, loss and emotive expressiveness. 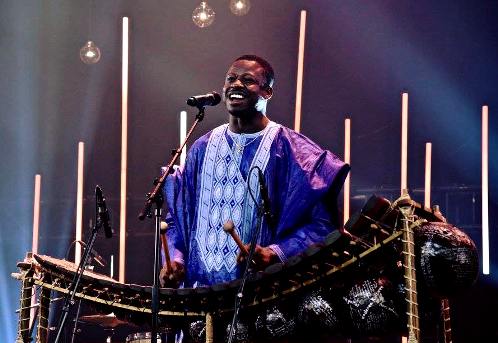 Mamadou Diabate was born in 1973 into a traditional 'Jeli' musical family in Burkina Faso, W Africa. They had a long history of story-telling and music-making. From a very young age he learnt from the Balofonist masters in neighbouring countries around him.

Today he lives in Austria where he performs his own compositions on the Balafon and other percussion instruments as well as singing. He sometimes joins up with his brother Seydou Diabate.

Aziza Brahim was born in a Sawrawi refugee camp in 1976 in Western Sahara.

She has risen above her formidably challenging background to become a major star on the African continent and in Spain where she currently resides. She says "I am as African as I am Arabian' and that music and her voice can be a powerful weapon, a tool for change, social comment and advancement. 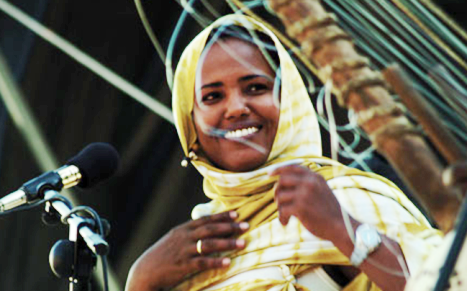 Her music is an enchanting, heady mix of Latin, Spanish, African, Hassaniya and desert blues (Ali Farka Toure). She recognises Mali as the cradle of African music. See here for more:

Contemporary African music is a huge industry with most countries supporting wonderful musicians who still use traditional African musical instruments like the kora (harp), djembe (drum) and mbira but overlay them with contemporary rhythms and lyrics. This has expanded to musical forms such as techno-funk and DJ culture that are way beyond their original context.

Tribal techno-funk fuses world dance rhythms with centuries old instruments and melodies creating haunting, trance-like sounds that contemporary belly dancers like Sharon Kihara are using in their performances. Hip-hop has its own language in Africa, different from the Americas where it emerged. Congolese rumba takes on powerful rhythms and narratives just as contemporary art does in this country.

The aim of this music is to give Congolese subjects a form of release from their daily hardships. The force of this music compels the body to escape from itself, either by using the body itself, the buttocks and the hips swinging like a pendulum, or by simply listening to all the complexities the music presents; its rhythms, lyrics, tensions and melodies.

Either way a state of serenity is achieved. 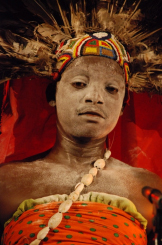 Jimmy Omonga was born in Kinshasa, Congo and taught himself to play guitar, singing in a choir and writing his own songs by sixteen. He moved to Angola and then Cape Town where he combined his beautiful Congolese ballads with Afro-pop and the South African choir tradition.

The catchy sounds produced were so original that he was labelled the 'Best Newcomer in World Music' by Beat Int, UK in 2008. He continues to astonish and delight both abroad and in Africa, playing at festivals like Sauti za Busara in Zanzibar.

Another music festival that attracts large crowds and musicians to Africa is 'Festival au Desert' in Essekane, Mali. Below is Toubab Crewe, a band which fuses rock and roll and W African music blending Mali, and America's 'dirty south'.

They are usually to be found in the blues and jazz clubs of New York.