This contemporary African artist lives and works between his birthplace Ghana and his adopted place of residence, Nigeria after taking up a teaching post in Nsukka in 1975. Seldom has an individual from Africa had such impact on world aesthetics.

Currently the Professor of Sculpture at the UNN (University of Nigeria at Nsukka), El Anatsui also runs his own commercial workshop where, along with his team of helpers, he creates his world-renowned, mixed-media wall sculptures. 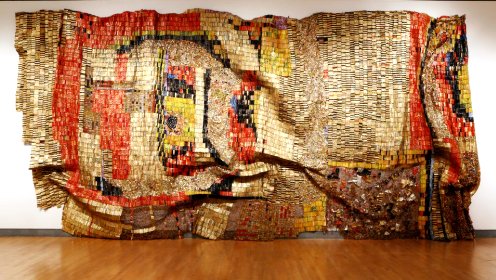 El Anatsui at the Brooklyn Museum

From the moment these metal tapestries were seen abroad, they have captured the attention of and delighted the souls of all who gaze on them. Luxuriantly sumptuous with their metallic hues, rich in detail and design and monumental in scale, they transcend the world’s perception of ‘art from Africa’.

His cloths hang in numerous prestigious museums and public collections: The Pompidou Centre in Paris, the British Museum in London, the National Museum of African Art, Washington and the de Young Museum, San Fransisco to name but a few.  Every year he is featured in group exhibitions all across the globe. He continues to be represented by October Gallery in London who first hung his wall sculptures in 2002 with pieces called 'Woman's Cloth' and 'Man's Cloth' and by Jack Shainman in New York.

He has received many awards in his lifetime but most notably the “Golden Lion for Lifetime Achievement Award” from the 56th Venice Biennale; a most worthy recipient.

Working primarily with metal, he uses found objects (like bottle-tops and metal liquor bottle caps) and reconfigures them to create what he calls his assemblages.

He also works in wood and clay. 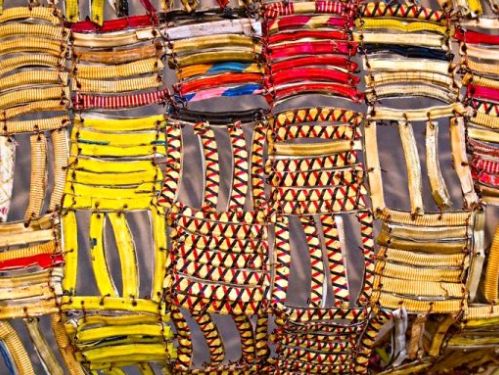 His team of studio assistants are an integral part of the creation once the concept is realized; cutting, separating strips by colour and pattern, punching holes, binding with metal clips and telephone or copper wire…its a long and meticulous process to the end. He essentially paints with his materials building them up piece by piece until they form great swathes of cloth.

Anatsui's themes are generally about over-consumption, the environment and transformation. He has addressed a wide range of social,political and historical concerns over his lengthy career and has equally embraced a diverse method of production and media.

El Anatsui hates to be ‘boxed’ in any way, personally or by definition of his work. He evades definitions: His hangings might be called sculpture, landscape, cloth, tapestry or mosaic.... essentially they are handcrafted objects with a strong conceptual dimension.

One of the things that makes him so unique is that he is not attached to the final outcome. He regards the making and the hanging of the finished piece a collaborative process letting his teammates and the curators hang them the way they see fit for that moment in time and space.

It’s a fabulous notion, his tapestries become living things, fluid by form, nature and aspiration. A piece can be hung with folds, straight, down on the floor so it has no gathers, scrunched or hung with lighting that allows shadows to play on the wall behind it. 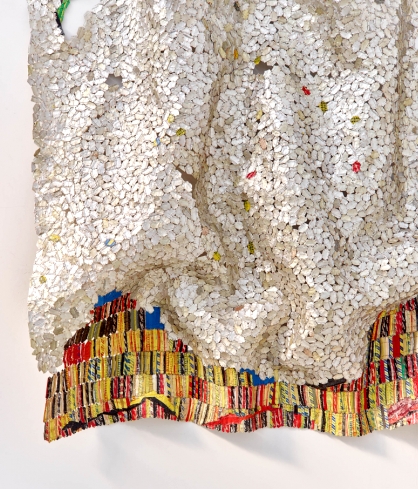 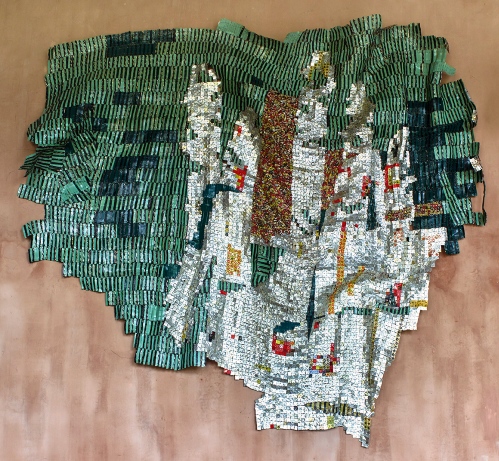 The repetitively hand-stitched bottle caps evoke a traditional feel of cultural handcraft. Although the material comes from mass produced products, there is no industrial feeling to it and there is a sense of emotion and consideration in the work.